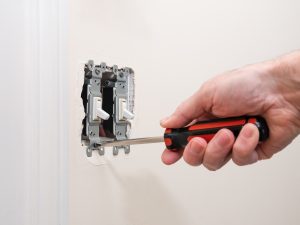 As something found in every home, it isn’t often that we think about whether we’re in need of light switch repair. A light switch is a mechanical device with a variety of moving parts that gets thousands of uses over the course of its lifespan. For this reason, it should be no surprise that light switches eventually wear out and go bad.

While this is the most obvious sign of a light switch in need of repair, there are various other warning signs that can be a bit more subtle that you should be on the lookout for. Today, our electricians at Right Electrical Services will be telling you all about the most common signs of trouble. If you notice any of the warning signs on this list, contact us for light switch repair today!

While it is not at all uncommon to see a small spark coming from inside a switch when turning it off (in fact, this is pretty normal), a sparking light switch that causes smoking can be a sign of a bigger problem. Additionally, if you notice scorch marks on either the switch toggle or cover plate, you’re definitely in need of light switch repair.

A small spark noticed when turning off a light switch is caused by something called a load arc. A load arc occurs when electricity jumps between the contacts as they pull away from each other. In normal cases, a load arc stops once the contacts are far enough apart. That being said, a large spark or a spark that emits an audible noise is indicative of a faulty light switch in need of repair.

Problems With Your Light Fixture 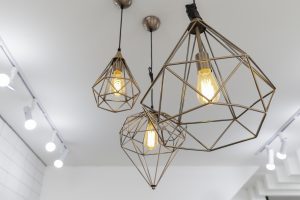 Another sign that you may be in need of light switch repair is found in a temperamental light fixture. If you’ve ever flipped the toggle lever on a light switch to the ON position only to find that it takes the light a moment to come on, this could be a sign of a problem.

Additionally, if you find that your light fixture flickers momentarily before coming on, this often indicates that the metal parts found inside of the light switch are wearing out. When these metal parts wear out, the switch’s contacts are failing to connect and this means an electrical path can’t be formed to allow the light to come on.

Even if you find that this problem occurs only occasionally, it’s still time to contact an electrician for light switch repair or replacement. It should also be noted that it’s possible that either the light fixture or switch has loose connections or even a short circuit that causes intermittent failure. This means that you’ll want to have a look at the light fixture itself next if the problem persists after replacing the switch.

A Light Switch That is Warm to the Touch

While it is perfectly natural for a dimmer switch to generate a small amount of heat that can be felt when operating the switch, a light switch that feels genuinely hot to the touch is a warning sign.

Generally, a small amount of heat is generated due to the fact that a dimmer operates by dissipating some of the heat of the full current flow in order to dim the light from the fixture. This heat, however, should be minimal and is usually only felt when operating the switch.

It should be noted that standard toggle-type wall switches should generally feel cool to the touch. If warmth is felt in a standard switch, this is a sign that the electrical flow is abnormal, indicating that the light switch is failing.

Another possibility is that the light switch itself is undersized for its application. If a light switch rated for 15 amps is installed on a 20-amp circuit, for example, the circuit is likely to heat up if it’s controlling a number of devices or fixtures that draw over 15 amps of power. In this case, you should replace the light switch with a properly rated 20-amp switch.

Believe it or not, your fingers are often the best detectors of a switch in need of light switch repair. If you find that your light switch toggle starts behaving differently than usual (i.e. becoming stiffer than usual or losing its “snap”) it’s a good sign that the switch mechanism is worn and should be replaced immediately by a qualified electrician.

Lastly, faulty light switches are known for making a variety of electrical noises. From clicking and buzzing to popping and sizzling, there are various noises you may experience that should be cause for some concern. Sometimes these noises can be caused by loose wire connections so checking the wiring is a great place to start. More than likely, however, these sounds are indicative of either a worn or defective light switch. It’s time for light switch repair or replacement.

If you notice that your dimmer switch is buzzing, however, you’ll want to start by taking a look at the light bulb first. This is because the dimming effect can make some light bulbs buzz as the filament structure is made to vibrate. You can rectify the problem by trying a different bulb or brand of light bulb. If that doesn’t work, however, you might want to consider taking another look at your light switch.

Have you experienced any of the above problems when trying to use a light switch in your home? You may be in need of light switch repair from our electricians here at Right Electrical Services!

Give us a call at (919) 359-1017 or use request service online. We specialize in electrical repair and will have the problem fixed in no time.