Electrical Work in the Office: 5 Key Signs You Need an Electrician 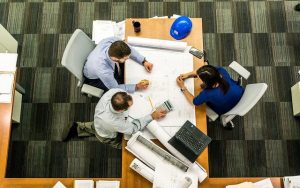 When it comes to the need for electrical work, most of us tend to be on top of things when it comes to our homes. After all, that’s where we live and noticing possible electrical problems is a bit easier. But what about noticing the need for electrical work in the office? The average person will spend 90,000 hours at work over the course of a lifetime, making it clear that the time we spend in our office spaces builds up.

Electrical Problems in the Office to Look Out For

The following electrical problems tend to happen from both wear and age. In some of these cases, the problems could be due to your building contractors and engineers not taking additional load into account when upgrading or expanding. Always watch out for these signs and have a licensed electrician fix the underlying cause in order to save time and money. A licensed electrician has the knowledge and skill required to diagnose the issue and fix the electrical system to keep your office running efficiently!

One of the first key signs that you have an electrical problem in your office are dead outlets. While an overactive outlet indicates a problem with some nearby components, a dead outlet is often indicative of a larger problem further down the line. Most commonly, a dead outlet is caused by a tripped breaker or a poor connection. This problem can be indicative of a large electrical problem with your office’s overall electrical system so don’t wait to call an electrician if you have dead outlets! This problem needs to be tracked to the source and repaired immediately.

Outlets That Are Sparking

Electrical outlets involve electricity as a current doing work. Whenever that current builds up and has nowhere to escape to, this creates heat. This heat can then begin to deteroriate nearby components, resulting in a sudden discharge of that build up. If you notice sparks, the wiring and components behind the outlet cover are likely corroded or decayed. This is an electrical fire hazard and can lead to costly and even deadly consequences so this isn’t an electrical problem that you can afford to ignore! Call a local electrician to diagnose the problem and offer electrical repair today.

If you have noticed flickering lights in your office, this is likely due to the fact that the bulbs are dying in fluorescents. These are also known to die whenever the wiring connections hitch or are loose. In each of these cases, the power flow isn’t steady so the lights don’t handle steady, resulting in flickering. It is also important to note that flickering lights can cause a build up of heat at the connection points, resulting in other electrical problems. Flickering lights are more than just annoying for you and your employees- they could also be indicative of a larger problem with the electrical system in your office. Don’t delay- call an electrician today!

A burning smell in the office is never a good thing. If you have noticed a burning smell that is either smokey or an ozone smell, both are indicative of an electrical problem, but slightly different problems. For example, smokey smells are typically present from burned objects such as baseboards, walls, or insulation. Ozone smells, on the other hand, indicate that the wires themselves have been burned. This typically happens when a circuit is overloaded, overheating and melting the wiring itself. A burning smell is a key sign that there is a risk somewhere of an electrical fire so this is yet another common electrical problem in an office that shouldn’t be overlooked.

Don’t hestitate to reach out to Right Electrical Services, LLC for any of your electrical problems in the office. Our licensed electricians are highly skilled and knowledgable of every electrical issue and can repair the problem immediately. Contact us today by calling us at (919) 359-1017 or by filling out a Request Service form online. We’ll get you on the schedule immediately!

One Reply to “Electrical Work in the Office: 5 Key Signs You Need an Electrician”