Electrical Terminology You Need to Know For Your Home 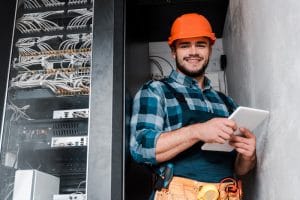 Is it common for your electrician to use electrical jargon that you don’t understand? Or do you find it tough to explain the electrical problem you’re facing at home or at work? Worry not! This article is just for you. In this blog, we are going to help you understand some of the most common electrical terms used. Understanding this terminology will also give you a clear idea every time you call in an electrician to install, service, or test electrical devices at your home or office.

A circuit is a single loop of electrical flow. For example, your lighting is on one circuit, while your oven is on another. Electricity only produces energy as it flows and involves a full circuit. When you have an electrical shock, you completely complete the circuit, which is why those men who operate on those high-voltage lines don’t get shocked. If electricity has nowhere to go, it can try to go into the earth, which might be you.

A short circuit occurs where electricity does not complete the usual full circuit that was made, such as when two bare wires come into contact anywhere they should not be. A short circuit may be caused by water between two wires.

There are 2 types of current. AC is an abbreviation for Alternating Current. This is an electric current that reverses direction at frequent intervals several times a second. DC is an abbreviation for Direct Current. A direct current is an electric current that runs only in one direction. Alternating Current is the most common source of electricity in your home or work. This is not the same as the direct current which can be used in batteries.

This is the equivalent of a fuse.  If there is a surplus of electricity running through a circuit, the circuit can immediately cut the flow of electricity through the circuit. Fuses must be removed and replaced, while the circuit breaker just needs to be reset.

Amperage is abbreviated to amp. This is a ratio of the number of electrons passing into a circuit to the force with which they are moving.

A voltage is a measurement unit. One volt is proportional to the potential difference used to move one amp of current against one ohm of resistance. It essentially represents the current’s force.

This is the main electrical panel that contains all of the fuses as well as more recent circuit breakers and distributes energy equally in your household. This is where any circuit in your house can begin and finish. This is also known as the service panel or fuse box, though modern ones do not have fuses.

This is a term used to describe the casing in which electrical wires are hidden. These are used where electrical wires must run around the outside of your house or office. They provide extra protection from damage to the wires or electric shock to those nearby. Don’t worry, we’re not just talking about the sort of shocks that make your hair stand on end!

The new light bulbs are not working

If a new lamp fails to light or begins to flicker, the wire may be bent or worn. An electrician may inspect the installation and provide a solution. Find out how much a professional electrician costs. And, don’t forget to get at least 3 electrician quotes before you decide whom you want to hire.

And we’re not just talking about the sort of shocks that make your hair stand on end! Also, minor noises from a plug socket or switch may signify an electrical problem that will worsen over time. Since the effects of faulty wiring can be serious, electric shocks can never be treated lightly.

Burning from plugs or switches

When you use a plug or switch and find a burning smell or charring on the appliance, it’s time to call an electrician. Initially, this may be triggered by overheating wiring, but it can quickly escalate into a fire or a more serious problem behind the scenes.

When a plug is turned on, it may feel hot to the touch. This may mean faulty wiring. Hiring a specialist electrician to analyze the cause of heat is often a good idea. DIY electrical work is illegal in Australia and is punishable by serious fines that vary by state. Making this a do-it-yourself project may result in serious injury.

Electricians are professional tradies who install, service, and repair wiring and electrical systems both inside and outside your home or office. Common electrical jobs include:

This article is a guest post contributed by Arth Camacho. Thanks for your contribution!