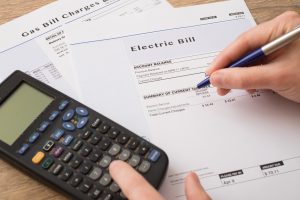 With electrical costs rising each and every year, it’s more important than ever to identify the common causes of your high electric bill. The use of energy-efficient light bulbs and appliances can help cut costs but sometimes unidentified, costly electrical problems can burn a hole in your pocket. If you notice a sudden spike in your electric bill, there are probably issues that need to be diagnosed. Today, we’ll be going over a few of the most common causes for high electric bills and how they can be fixed.

Let’s go ahead and get the worst of the worst out of the way first. This problem can be time-consuming to fix so contacting a licensed electrician and identifying the problem as soon as possible is vital.

How to Fix an Electrical Leak

Before you can get started on fixing an electrical leak you’ll have to, of course, identify that this is the problem. Considering it can be difficult to identify an electrical leak (because of factors we’ll talk about in a minute) we recommend hiring an experienced electrician to examine your electrical system.

That may sound easy enough and you may be thinking, “What’s the big deal? I don’t need to call an electrician for that” but you’d be taking a risk. Why? Many current appliances will continue to function- even when switched off. This means that unless you make sure to unplug every single appliance. To further our point about the complicated process of identifying an electrical leak, things like GFCI outlets with indicator lights can prove misleading. Identifying an electrical leak is largely a long, trial-and-error process and should be left to a knowledgeable electrician.

Luckily, here’s a problem that can be easily identified and fixed. If you neglect to turn your pool pump off each day, you’ll unnecessarily waste a large amount of energy. Pool pumps aren’t designed to run consistently every single day so you don’t want to forget to turn it off. Pushing your pool pump to the limit may cause it to wear down and the pump timer is likely to fail.

The Easy Solution to the Pool Pump Problem

We’ll keep this short as the fix is common sense and you’ve likely already figured it out. If you’re pool pump is running constantly, switch it off. We understand this can be easy to forget but pool maintenance in general is demanding (and if you own a pool, you’re aware of this). Just as you would dedicate your time to skimming, vacuuming, or running your filters, make attention to your pool pump just as important.

Summer is coming up and pools are a great way to unwind and have fun. But don’t let your pool pump drain that extra energy! If you’re looking to install your very own pool, give our Raleigh electricians a call. We can offer our pool or hot tub installation expertise and suggest beautiful LED lighting options to get the most out of the space.

Misuse of Ceiling Fans and Lights

If you’re assuming that we’re referring to lights being left on when they aren’t actively in use, you are halfway right. This is of course a huge source of wasted energy and can drain more energy than you would think. This kind of misuse of lights add up and your entire household should make an effort to switch those lights off each time they leave a room. But that’s not the only way that your lights and ceiling fans can cause a spike in your electric bill.

We’re willing to bet that you use lights to brighten entire rooms in your home but this is a huge waste- there is a better way! Elect to instead focus your lights on brightening up specific areas in your home. You may think that adding more lamps to a room would be less effective than a single source of lighting providing light to the entire room but this is a misconception. If you really think about it, focusing lights that demand less energy than a light used for an entire room will most certainly cut your energy costs. This means you only have to use the lights that you need.

What about ceiling fans? Similarly to the common tendency to leave lights on when you leave a room, keeping ceiling fans running in unoccupied rooms is also incredibly wasteful. It should be kept in mind that ceiling fans are only useful in cooling down the room it occupies. You can also guarantee energy-efficiency by taking a number of factors into consideration when installing your ceiling fan.

Using Appliances For Too Long

One of the larger (and most common) reasons for high electric bills are the use of appliances that have far passed their prime. Older appliances are much more demanding of energy compared to newer appliances with that use considerably less energy. In fact, Energy Star didn’t even start assigning grades to household appliances until 1997.

We, of course, would advise you to replace your old appliances. Sure, you’ll pay money up front for a new appliance but this cost will be far less than what you’ll spend in energy costs long-term. Believe us, there’s a more energy-efficient choice here.

Our fifth and final cause for high electric bills involves factors that are existent in every household- devices that require regular charging. From smartphones and tablets to electric toothbrushes and game systems, there is something in your home that requires a recharge.

If you consider yourself a tech junkie who always needs the latest upgrade, you should especially consider how your new toys may be affecting your electric bill. Just like our tendency to leave the lights on in unoccupied rooms, leaving chargers plugged in when not in use is a huge drain of energy. We call these energy wasters vampire devices because they literally suck the energy from your home- valuable, costly energy that shouldn’t be wasted.

Make a conscious effort to unplug chargers when they aren’t actively in use. This may seem tedious and it’s so much easier to just plug in and forget but you’re burning a hole in your pocket.

It’s also important to keep in mind that keeping a device plugged in once it’s reached a 100% charge is just as much of a waste of energy. We’ve all been there- our phone is low on battery and it’s just so much easier to leave it plugged in to charge while we use it. But we’re willing to bet that once your phone has reached a full charge, you just keep using your device. I know I’ve done it!  Need more incentive to make a change? Consider that many devices (such as many smartphones) will actually be harmed by excessive charging and will likely shorten the life of your gadget.

Next time you receive your electric bill and nearly drop dead of shock, try to stop and identify the source. It’s likely that one (or several) of the common causes of high electric bills that we’ve included on this list are to blame. If you can’t seem to locate the issue yourself, feel free to call your energy provider to determine a cause. If you have an electrical issue (like the electrical leaks we talked about earlier), don’t hesitate to call Right Electrical Services. We’re here to help.

2 Replies to “A High Electric Bill: 5 Common Causes and Fixes”